The Inscrutable Power of Maya

Baba’s words were always short, pithy, deep, full of meaning, efficient and well-balanced. He was ever content and never cared for anything. He said, “Though I have become a Fakir, have no house or wife, and though leaving off all cares, I have stayed at one place, the inevitable Maya teases Me often. Though I forgot Myself I cannot forget Her. She always envelops Me.This Maya (illusive power) of the Lord (Shri Hari) teases God Brahma and others; then what to speak of a poor Fakir like Me? Those who take refuge in the Lord wil be freed from Her clutches with his grace”.

In such terms Sai Baba spoke about the power of Maya. Lord Shri Krishna has said to Uddhava in the Bhagwat that the Saints are His living forms; and see what Sai Baba had said for the welfare of His devotees: “Those who are fortunate and whose demerits have vanished; take to My worship. If you always say ‘Sai, Sai’ I shall take you over the seven seas; believe in these words, and you will be certainly benefited. I do not need any paraphernalia of worship – either eight-fold or sixteen-fold. I rest there where there is full devotion”. Now read what Sai, the friend of those, who surrendered themselves to Him, did for their welfare.

One Bhimaji Patil of Narayanagaon, Taluka Junnar, Dist. Poona, suffered in the year 1909 A.D. from a severe and chronic chest-disease which ultimately developed into Tuberculosis. He tried all sorts of pathos (remedies), but to no effect. Losing all hopes, he ultimately prayed to God – “Oh Lord Narayana, help me now”. It is a well known fact that, when our circumstances are well off, we do not remember God, but when calamities and adversities overtake us, we are reminded of Him, So Bhimaji now turned to God. It occurred to him that he should consult Mr. Nanasaheb Chandorkar, a great devotee of Sai Baba, in this respect. So he wrote to him a letter, giving all details of his malady, and asking for his opinion. In reply, Mr. Nanasaheb wrote to him that there was only one remedy left, and that was to have recourse to Sai Baba’s Feet. Relying on Mr. Nanasaheb’s advice, he made preparations for going to Shirdi. He was brought to Shirdi and taken to the Masjid, and placed before Sai Baba. Mr. Nanasaheb and Shama (Madhavrao Deshpande) were then present. Sai Baba pointed out that the disease was due to the previous evil karma, and was not at first disposed to interfere. But the patient cried out in despair that he was helpless, and sought refuge in Him, as He was his last hope, and prayed for mercy. Then Sai Baba’s heart melted an He said, “Stay, cast off your anxiety, your sufferings have come to an end. However, oppressed and troubled one may be as soon as he steps into the Masjid, he is on the pathway to happiness. The Fakir here is very kind and He will cure the disease, and protect all with love and kindness.” The patient vomitted blood every five minutes, but there wa no vomiting in the presence of Baba. From the time, Sai Baba uttered the words of hope and mercy, the malady took a favourable turn. Sai Baba asked him to stay in Bhimabai’s house, which was not a convenient and healthy place, but Sai Baba’s order had to be obeyed. While he was staying there, Sai Baba cured him by two dreams. In the first dream, he saw himself as a boy suffering the severe pain of a flogging, which he received for not reciting his ‘Swami-poetry’ lesson before his class-master. In the second dream, some one caused him intense pain, and torture, by rolling a stone up and down over his chest. With the pain thus suffered in dream, his cure was complete, and he went home. He then often came to Shirdi, gratefully remembering what Sai Baba did for him, and prostrated before Him. Sai Baba also did not expect anything from devotees, but grateful remembrance, unchanging faith and devotion. People in the Maharashtra, always celebrate Satya-Narayana Puja in their homes every fortnight or month. But it was this Bhimaji Patil, who started a new Sai Satya-vrata Puja, instead of Satya-Narayana-vrata Puja, in his house, when he returned to his village.

Another devotee of Sai Baba by name Bala Ganapat Shimpi, suffered much from a malignant type of Malaria. he tried all sorts of medicines and decoctions, but in vain. The fever did not abate a jot and so he ran to Shirdi and fell on Sai Baba’s Feet. Sai Baba gave him a strage recipe, in this case as follows:- “Give a black dog some morsels of rice mixed with curds in front of the Laxmi temple”. Bala Shimpi did not know, how to execute this recipe; but no sonner he went home, then he found rice and curds. After mixing them together, he brought the mixture near the Laxmi temple, when he found the a black dog waving its tail. He placed the curds and rice before the dog. The dog ate it and, strange to say, Bala got rid of his Malaria.

Shriman Bapusaheb Booty suffered, once from dysentery and vomitting. His cupboard was full of patent drugs and medicines, but none of them had any effect. Bapusaheb got very weak, on account of purgings and vomittings and, therefore, was not able to go to the Masjid for Sai Baba’s darshana. Sai Baba then sent for him and made him sit before Him and said, “Now take care, you should not purge any more” and waving His index-finger “The vomiting must also stop”. Now look at the force of Sai Baba’s words. Both the maladies took to their heels (disappeared) and Booty felt well.

On another occasion he had an attack of Cholera, and suffered from severe thirst. Dr. Pillai tried all sorts of remedies but could give him no relief. Then he went to Sai Baba and consulted Him as what to drink that would allay his thirst and cure the disease. Sai Baba prescribed an infusion of almonds, walnuts, pistachio (a kind of dry fruit), boiled in sugared milk. This would be considered, as a fatal aggravation of the disease by any other doctor or physician, but in implicit obedience to Sai Baba’s order, the infusion was administered and strange to say, the disease was cured.

A Swami from Alandi, wishing to take Sai Baba’s darshana, came to Shirdi. He suffered form a severe pain in his ear, which prevented him from getting the sleep. He was operated for this, but it served no purpose. The pain was severe and he did not know what to do. While he was returning, he came to take Sai Baba’s leave, when Shama (Madhavrao Deshpande) requested Sai Baba to do something for the pain in the Swami’s ear. Sai Baba comforted him saying, “Alla Accha Karega (God will do good).” The Swami then returned to Poona, and after a week sent a letter to Shirdi, stating that the pain in his ear had subsided though the swelling was there, and in order to get the swelling removed, he went to Bombay for operation, but the surgeon on examining the ear said that no operation was then necessary. Such was the wonderful effect of Sai Baba’s words.

Another devotee named Kaka Mahajani suffered once from diarrhea. In order that there should be no break in his services to Sai Baba, Kaka kept a tambya (pot) with water in some corner of the Masjid and whenever there was a call, he would go out. As Sai Baba knew everything, Kaka did not inform Him of his disease, thinking that Sai Baba would of His own cure it soon. The work of constructing the pavement in front of the Masjid was permitted by Sai Baba, but when the actual work was begun, Sai Baba got wild and shouted out loudly. Everybody ran away, and as Kaka was also doing the same, Sai Baba caught hold of him and made him sit there. In the confusion that followed, somebody left the a small bag of groundnuts. Sai Baba took a handful of groundnuts, rubbed them in His hands, blew away the skins, and gave the clean nuts to Kaka and made him eat them. Scolding and cleaning the nuts, and making Kaka eat them, went on similtaneously. Sai Baba Himself ate some of them. Then, when the bag was finished, Sai Baba asked him to fetch water as He felt thirsty. Kaka brought a pitcher full of water. Then Sai Baba drank some water and made Kaka also drink it. Sai Baba then said, “Now your diarrhea has stopped, and you may attend to the work of the pavement.” In the meanwhile other persons, who had run away, returned and started the work; and Kaka, whose motions had stopped, also joined them. Are groundnuts medicine for diarrhea? According to current medical opinion, groundnuts would aggravate the disease, and not cure it. The true medicine, in this as in other cases, was Sai Baba’s word.

A gentleman from Harda by name Dattopant suffered form stomach-ache for fourteen yeas. None of the remedies gave him any relief. Then hearing of Sai Baba’s fame, that He cures diseases by sight he ran to Shirdi, and fell at Sai Baba’s Feet. Sai Baba looked at him kindly and gave him blessings. When Sai Baba placed His hand on his head, and when he got Sai Baba’s Udi with blessing, he felt relieved and there was no further trouble about the malady.

Towards the end of this Chapter three cases are cited in footnotes:

1. Madhavrao Deshpande suffered from Piles. Sai Baba gave him decoction of Sonamukhi (senna pods). This relieved him. Then after two years the trouble again recurred and Mahdavrao took the same decoction without consulting Sai Baba. The result was that the disease aggravated but later on it was cured by Sai Baba’s grace.

2. Kaka Mahajani’s elder brother, Gangadharpant, suffered for many years from stomach-pain. Hearing Sai Baba’s fame he came to Shirdi and requested Sai Baba to cure him. Sai Baba touched his belly and said, “God will cure”. From that time there was no stomach-pain and he was completely cured.

3. Nanasaheb Chandorkar also once suffered from intense stomach-pain; he was restless the whole day and night. Doctors administered syringes which produced no effect. Then he approached Sai Baba, who told him to eat Burfi (a kind of sweetmeat) mixed with ghee. This recipe gave him complete relief.

All these stories go to show, that the real medicine that cured the various diseases permanently was Sai Baba’s word, and grace, and not any medicines or drugs. 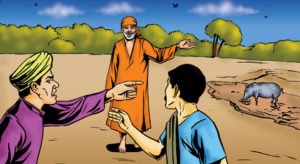 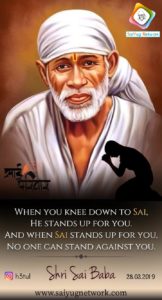 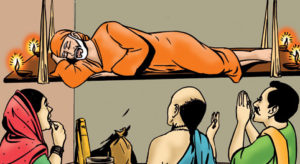