The readers may remember that mention was made in the 6th Chapter regarding the Rama-Navami Festival in Shirdi; how the festival originated and how in the early years there was a great difficulty in getting a good Hardidas for performing Kirtan on that occasion, and how Sai Baba permanently entrusted this function (Kirtan) to Dasganu permanently. Now in this Chapter we shall describe the manner in which Dasganu was performing the Kirtan.

Generally our Haridasas, while performing the Kirtan, wear a gala and full dress. They put on a head-dress, either a pheta or a turban, a long flowing coat with a shirt inside, an uparane (short dhotar) on the shoulders and the usual long dhotar from the waist below. Dressed in this fashion for some Kirtan in the Shirdi village, Dasganu once went to bow to Sai Baba. Sai Baba asked him – “Well, bridegroom! where are you going dressed so beautifully like this?” ‘For performing a Kirtan’ was the reply. Then Sai Baba said – “Why do you want all this paraphemalia-coat, uparani and pheta etc, doff all that before Me, why wear them on the body?” Dasganu immediately took them off and placed them at the Sai Baba’s Feet. From that time Dasganu never wore these things while performing the Kirtan. He was always bare from waist upwards, a pair of `chiplis’ was in his hand and a garland round his neck. This is not in consonance with the practice generally followed by all the Hardidasa, but this is the best and the purest method. The sage Narada, from whom the Kirtan-Paddhati originated, wore nothing on his trunk and head. He carried a ‘veena’ in his hand, and wandered from place to place everywhere singing the glory of the Lord.

Initially, Sai Baba was known in Poona and Ahmednagar Districts, but Nanasaheb Chandorkar, by his personal talks and by Dasganu, by his splendid Kirtans, spread the fame of Sai Baba in the Konkan (Bombay Presidency). In fact, it was Dasganu – May God bless him-who, by his beautiful and inimitable Kirtans, made Sai Baba available to so many people there. The audience, who come to hear the Kirtans have different tastes. Some like the erudition of the Haridas; some his gestures, some his singing, some his wit and humour, some his preliminary dissertation on Vedanta, and some others, his main stories and so on; but among them, there are very few, who by hearing the Kirtan get faith and devotion or love for God or saints. The effect of hearing Dasganu’s kirtan on the minds of audience was however electric, as it were. We give an instance here:

Dasganu was once performing his Kirtan and singing the glory of Sai Baba, in the Koupineshwar temple in Thana. One Mr. Cholkar, a poor man serving as a candidate in the Civil Courts in Thana, was amongst the audience. He heard Dasganu’s Kirtan most attentively and was much moved. He there and then mentally bowed and vowed to Sai Baba saying – “Baba, I am a poor man, unable to support my family. If by your grace, I pass the departmental examination, and get a permanent post, I shall go to Shirdi, fall at Your Feet and distribute sugar-candy in Your name.” As good luck would have it, Mr.Cholkar did pass te examination and did get the permanent post and now it remained for him to fulfil his vow, the sooner the better. Mr. Cholkar was a poor man with a large family to support; and he could not afford to pay for the expenses of a Shirdi trip. As is well said, one can easily cross over Nahne ghat in Thana District or even the Sahyadri Range; but it is very difficult for a poor man to cross Umbareghat, i.e., the threshold of his house. As Mr. Cholkar was anxious to fulfill his vow as early as possible, he resolved to economize, cut down his expenses, and save money. He determined not to use sugar in his diet; and began to take his tea without it. After he was able to save some money in this way, he came to Shirdi, took Sai Baba’s darshan, fell at His Feet, offered a coconut, distributed it with a clean conscience along with sugar-candy as per his vow and said to Sai Baba that he was much pleased with His darshan and that his desires were fulfilled that day. Mr. Cholkar was in the Masjid with his host Bapusaheb Jog. When the host and the guest both got up and were about to leave the Masjid, Sai Baba spoke to Jog as follows:- “Give him (your guest) cups of tea, fully saturated with Sugar.” Hearing these significant words, Mr. Cholkar was much moved, he was wonderstruck, his eyes were bedewed with tears, and he fell at Sai Baba’s Feet again. Mr. Jog was also curious about this direction, regarding the tea-cups to be given to his guest. Sai Baba wanted by His words to create faith and devotion in Cholkar’s mind. He hinted as it were, that He got the sugar-candy as per his vow and that He knew full well his secret determination not to use sugar in his diet. Sai Baba meant to say, “If you spread your palms with devotion before Me, I am immediately with you, day and night. Though, I am here bodily, still I know what you do; beyond the saven seas. Go wherever you will, over the wide world, I am with you. My abode is in your heart and I am within you. Always worship Me, Who is seated in your heart, as well as, in the hearts of all beings, Blessed and fortunate, indeed, is he who knows Me thus”,

What a beautiful and important lesson was thus imparted by Sai Baba to Mr. Chokar !

Now we close this Chapter, with a story of two little lizards. Once Sai Baba was sitting in the Masjid. A devotee sat in front of Him, when a lizard tick-ticked. Out of curiosity, the devotee asked Baba whether this tick-ticking of the lizard signified anything; was it a good sign or a bad omen? Sai Baba said that the lizard was overjoyed as her sister from Aurangabad was coming to see her. The devotee sat silent, not making out the meaning of Sai Baba’s words. Immediately, a gentleman from Aurangabad came on horse-back to see Sai Baba. He wanted to proceed further, but his horse would not go, as it was hungry and wanted grams. He took out a bag from his shoulders to bring grams and dashed it on the ground to remove dirt. A lizard came out therefrom and in the presence of all, climbed up the wall. Sai Baba asked the questioner devotee to mark her well. She at once went strutting to her sister. Both sisters met each other after a long time, kissed and embraced each other, whirled round and danced with love! Where is Shirdi and where is Aurangabad? How should the man on horse-back come there from Aurangabad with the lizard? And how should Sai Baba make the prophesy of the meeting of the two sisters? All this is really very wonderful and proves the omniscience — the all-knowing nature of Sai Baba.

He who respectfully reads this Chapter or studies it daily, will get all his miseries removed by the grace of the Sadguru Sai Baba.

Coming up next: Chapter 16 and 17 – Shri Sai Satcharita 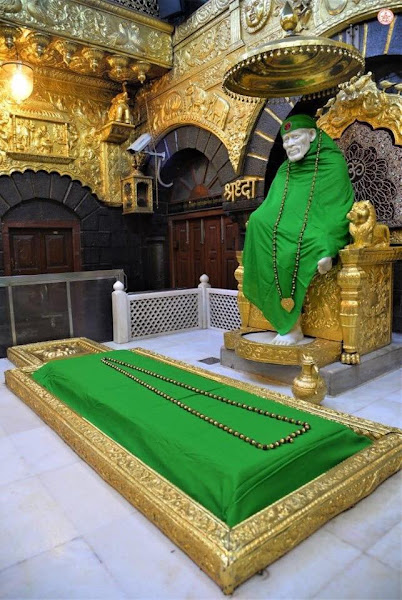