All the things that we see in the universe are nothing but a play of Maya — the creative power of the Lord. These things do not really exist. What really exists is the Real Absolute. Just as we mistake a rope of a garland or a stick for a serpent on account of darkness, we always see the phenomena, i.e. things as they outwardly appear, and not the Noumenon which underlies all the visible things. It is only the Sad-guru that opens the eyes of our understanding and enables us to see things in their true light and not as they appear. Let us, therefore, worship the Sad-guru and pray to him to give us the true vision, which is nothing but God-vision.

After decorating the Sad-guru with all jewelry in this way, let us offer our all to Him and wave chamar of devotion to ward off heat. After such blissful worship, let us pray thus:- “Introvert our mind, turn it inward, give us discrimination between the Unreal and the Real and non-attachment for all worldly things and thus enable us to get Self-realisation. We surrender ourselves, body and soul (body-consciousness and ego). Make our eyes Yours, so that we should never feel pleasure and pain. Control our body and mind as You will and wish. Let our mind get rest in Your Feet”.

Now let us turn to the stories of this Chapter.

Once it so happened that a devotee by name Pant, a disciple of another Sad-guru had the good fortune of visiting Shirdi. He had no mind to go to Shirdi, but man proposes one way and God disposes the other. He was travelling in a B.B. & C.I. Rly. train where he met many friends and relations bound for Shirdi. They all asked him to accompany them and he could not say nay. They alighted at Bombay while pant got down at Virar. There he took the permission of his Sadguru for the Shirdi trip and after arranging for the expenses, left with the party for Shirdi. They all reached the place in the morning and went to the Masjid at about 11 A.M. Seeing the concourse of the devotees assembled for Sai Baba’s worship, they were all pleased, but Pant suddenly got a fit and fell senseless. They were all frightened, still they tried their best to bring him to his senses. With Sai Baba’s grace and with pitchers of water which they poured over his head, he regained his consciousness and sat upright as if he was just awakened from sleep. The omniscient Sai Baba knowing that he was a disciple of another Guru, assured him fearlessness and confirmed his faith in his own Guru, by addressing him as follows :- “Come what may, leave not, but stick to your Bolster (support, i.e. Guru) and ever remain steady, always at-one-ment (in union) with him.” Pant at once knew the significance of this remark and thus he was reminded of his Sad-guru. This kindness of Baba he never forgot in his life.

There was a gentleman by name Harishchandra Pital in Bombay. He had a son, who suffered from epilepsy. He tried many allopathic and ayurvedic doctors, but there was no cure. There remained only one way of remedy, viz. resorting to the saints. It has been stated in Chapter XV that Das Ganu by his inimitable and splendid kirtans spread the fame of Sai Baba in the Bombay Presidency. Mr. Pitale heard some of these kirtans in 1910 and learnt therefrom and from others that Sai Baba, by His touch and mere glance, cured many incurable diseases. Then a desire arose in his mind to see Sai Baba. Making all preparations and taking presents and fruit-baskets, Mr. Pitale came to Shirdi with family, wife and children. He then went to the Masjid with them, prostrated before Sai Baba and placed his sick son on Sai Baba’s Feet. No sooner Sai Baba saw the child than an untoward thing happened. The son immediately revolved his eyes and fell down senseless. His mouth began to foam and his whole body began to perspire profusely and it seemed as if he breathed himself out. Seeing this, the parents became very nervous and excited. The boy used to get such fits very often, but this fit seemed to persist long. Tears began to flow ceaselessly from the mother’s eyes and she began to wail, crying that her condition was like that of a person, who being afraid of the robbers ran into a house which collapsed on him,or like a cow fearing a tiger, ran into the hands of a butcher, or like a traveller, who being tormented by the heat of the sun went to take refuge under a tree, which fell upon him, or like a devout person going for worship into a temple which collapsed upon him. Then Sai Baba comforted her saying – “Do not wail like this, wait a bit, have patience, take the boy to your lodging, he will come to his senses within half an hour.” They did as directed by Sai Baba and found that His words came true. As soon as he was taken into the Wada, the boy recovered and all the Pitale family, husband, wife and others were very delighted and all their doubts disappeared. Then Mr. Pitale came with his wife to see Sai Baba and prostrated himself before Him very humbly and respectfully and sat shampooing His legs and mentally thanking Sai Baba for His help. Sai Baba then smilingly said – “Are not all your thoughts, doubts and apprehensions calmed down now? Hari (Lord) will protect him, who has got faith and patience”. Mr. Pitale was a rich and well-to-do gentleman. He distributed sweet-meat on a large scale and gave Sai Baba excellent fruits and pan (betel-leaves). Mrs. Pitale was a very Sattwik lady, simple, loving and faithful. She used to sit near the post staring at Sai Baba with tears of joy flowing down from her eyes. Seeing her of an amicable and loving nature, Sai Baba was much pleased with her. Like Gods, Saints are always dependent on their devotees who surrender and worship them with their heart and soul. After passing some happy days in Sai Baba’s company, the Pitale family came to the Masjid to take Sai Baba’s leave to depart. Sai Baba gave them Udi and blessings and called Mr. Pitale close by and said to him – “Bapu, I had given you before, Rs. two, now I give you Rs. three; keep these in your shrine for worship and you will be benefited.” Mr. Pitale accepted these as Prasad, prostrated himself again before Sai Baba and prayed for His blessings. A thought arose in his mind, that as that was his first trip to Shirdi, he could not understand what Sai Baba meant, when He said that He had given Rs. two previously. He was curious to have this mystery solves, but Sai Baba kept silent. When Mr. Pitale returned to Bombay, he narrated to his old mother all that had happened at Shirdi and the mystery about Sai Baba’s giving him Rs. two formerly. The mother also did not understand the mystery, but, thinking seriously about that, she was reminded of an old incident, which solved the mystery. She said to her son – “As you now went to Sai Baba with your son, so had your father done when he took you to Akkalkot, for the darshana of the Maharaj there many years ago. That Maharaj was also a Siddha, Perfect Yogi, omniscient and liberal. Your father was pure, devout and his worship was accepted. He then gave your father Rs. two for being kept in the shrine and worshipped. Your father worshipped them accordingly till his death, but thereafter the worship was neglected and the rupees were lost. After some years the memory of these two rupees also disappeared and now, as you are very fortunate, the Akkalkotkar Maharaj has appeared to you in the form of Sai Baba just to remind you to your duties and worship, and to ward off all dangers. Now beware henceforth, leave off all doubts and bad thoughts, follow your ancestors and behave well; go on worshipping the family gods and the rupees, appraise properly and take pride in the blessing of the Saints. Sai Samartha has kindly revived the spirit of Bhakti in you, cultivate it it your benefit.” Hearing the remarks of the mother, Mr. Pitale was very much delighted. He came to know, and was convinced about the all-prevasiveness of Sai Baba and the significance of His darshan. From that time he became very careful about his behaviour.

Mr. Gopal Narayan Ambadekar of Poona was a devotee of Sai Baba. He served for ten years in the Abkari department in the Thana District and in Javhar state, from where he had to retire. He tried to get some other job, but he did not succeed. He was overtaken by other calamities and his condition grew from bad to worse. He passed 7 years in this condition, visiting Shirdi every year and placing his grievance before Sai Baba. In 1916 his plight became worst and be decided to commit suicide in Shirdi. So he came there with his wife and stayed for two months. One night while sitting in a bullock cart in front of Dixit’s Wada, he resolved to end his life by throwing himself into a well close by. He proposed to do one way but Sai Baba wished to do something else. A few paces from this place, there was a hotel and its proprietor Mr. Sagun, a devotee of Sai Baba, came out and accosted him thus – “Did you ever read this Akkalkotkar Maharaja’s life?” Ambadekar took that book from Sagun and began to read it. Casually, or we may say providentially he came across a story which was to this effect. – During the life time of Akkalkotkar Maharaj a certain devotee suffered very much from an incurble disease and when he could endure the agony and pain no longer, be became desperate and to end his miseries threw himself one night into a well. Immediately the Maharaj came there and took him out with his own hands and advised him thus – “You must enjoy the fruit – good or bad – of your past actions; if the enjoyment be incomplete, suicide won’t help you. You have to take another birth and suffer again; so instead of killing yourself, why not suffer for some time and finish up your store of the fruit of your past deeds and be done with it once and for all?”

Reading this appropriate and timely story, Ambadekar was much surprised, and moved. Had he not got Sai Baba’s hint through the story, he would have been no more. On seeing Sai Baba’s all-prevasiveness and benevolence, his faith in Him was confirmed, and hhe became a staunch devotee. His father was a devotee of Akkalkotkar Maharaj and Sai Baba wanted him to walk into his father’s footsteps and continue his devotion to Him. He then got Sai Baba’s blessings and his prospects began to improve. He studied astrology and gained proficiency in it and thereby improved his lot. He was able to earn sufficient money and passed his after-life in ease and comfort. 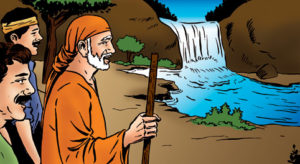