This Chapter continues the subject “Greatness of Udi” and describes cases in which the application of Udi was most efficacious.

At Malegaon (Dt. Nasik) there lived a doctor (qualified and degree-holder). His nephew suffered from an incurable disease – Tubercular bone-abcess. The doctor himself and his brothers, the medical practitioners, tried all sorts of remedies and even an operation. There was no relief and there was no end to the little boy’s suffering. Friends and relations advised the parents of the boy to seek divine aid and recommended them to try Sai Baba, who was known to have cured such incurable cases by His mere glance. The parents, therefore, came to Shirdi. They prostrated themselves before Sai Baba, placed the boy before Him and pleaded humbly and respectfully, and implored Him to save their son. The merciful Sai Baba comforted them saying “Those who resort to this Masjid shall never suffer anything in this life and to the end of time. Be now care-free. Apply Udi on the abcess and within one week he will recover. Believe in God. This is no Masjid, but Dwarawati. He who steps here will soon get health and happiness and his sufferings will come to an end”. The boy was made to sit before Sai Baba, Who moved his hands on the affected part and cast His loving glances on him. The patient was pleased and with the application of the Udi, he began to recover, and was all right after some days. The parents then left Shirdi with their son, thanking Sai Baba for the cure, which was effected by Udi and Sai Baba’s gracious looks.

After knowing this, the doctor, the uncle of the boy became wonder-struck and desired to see Sai Baba while he was on his way to Bombay for some business; but at Malegaon and Manmad somebody spoke to him against Sai Baba and poisoned his ears. He therefore, dropped the idea of visiting Shirdi and went to Bombay direct. He wanted to spend the rest of his leave at Alibag, but at Bombay he heard three successive nights, a voice crying out,”Still you disbelieve me?”. Then the doctor changed his mind and resolved to go to Shirdi. He had to attend in Bombay to a case of Infectious Fever, which showed no signs of abatement soon. So he thought that his Shirdi trip would be postponed. He however proposed a test in his mind and said,”If the patient gets all right today, I start for Shirdi tomorrow.” The wonder is that exactly at the time when the determination was taken, the fever began to abate and the temperature became normal. Then he went to Shirdi as per his determination, took Sai Baba’s darshan and prostrated himself before Him. Sai Baba gave him such experiences that he became His devotee. He stayed there for four days and returned home with Sai Baba’s Udi and blessings. Within a fortnight he was transferred on promotion to Bijapur. His nephew’s case gave him an opportunity for seeing Sai Baba and this visit engendered in him a neverfailing love for the Saint’s feet.

One Dr. Pillay was an intimate Bhakta of Sai Baba. He was much liked by Sai Baba, Who always called him Bhau (brother). Sai Baba talked with him off and on and consulted him in all matters and wanted him always at His side. This Pillay suffered once very badly from guinea-worms. He said to Kakasaheb Dixit, “The pain is most excruciating and unbearable. I prefer death to it. This pain, I know, is for repaying past Karma, but go to Sai Baba and tell Him to stop the pain and transfer the working of my past Karma to ten future births of mine.” Mr. Dixit went to Sai Baba and told Him his request. Then Sai Baba, being moved by his request, said to Dixit,”Tell him to be fearless. Why should he suffer for ten births? In ten days he can work out the sufferings and consequences of his past Karma. While I am here to give him temporal and spiritual welfare, why should he pray for death? Bring him here on somebody’s back and let us work and finish his sufferings once for all”.

The doctor was brought in that condition and was seated on Sai Baba’s right side,where Fakir Sai Baba always sat. Sai Baba gave him His bolster and said,”Lie calmly here and be at ease. The true remedy is, that the result of past actions has to be suffered and got over. Our Karma is the cause of our happiness and sorrow; therefore put up with whatever comes to you. Allah (God) is the sole Dispenser and Protector, always think of Him. He will take care of you. Surrender to His feet with body, mind, wealth and speech, i.e. completely and then see what He does.” Dr. Pillay said in return that Nanasaheb had put a bandage over the leg, but he found no relief. “Nana is a fool” replied Sai Baba. “Take off that bandage or else you will die. Now a crow will come and peck you, and then you will recover.”

While this conversation was going on, one Abdul, who always cleaned the Masjid and trimmed the lamps, turned up. While he was attending to his work of training, his foot accidentally fell upon the stretched leg of Dr. Pillay. The leg was already swollen and when Abdul’s foot fell upon it and pressed it, all the seven guinea-worms were squeezed out at once. The pain was unbearable and Dr. Pillay bawled out loudly. After some time, he calmed down and began to sing and cry alternately. Then Pillay enquired when the crow was coming and peeking. Sai Baba said, “Did you not see the crow? He won’t come again. Abdul was the crow. Now go and rest yourself in the Wada and you will be soon allright.”

By application of the Udi and by taking it in the stomach with water, and without taking any other treatment or medicine, the disease was completely cured in ten days as predicted by Sai Baba.

Shama’s younger brother Bapaji was staying near Sawool well. Once his wife was attacked with Bubonic plague. She had high fever and two bubos in her groins. Bapaji rushed to Shama at Shirdi and asked him to come and help. Shama was frightened, but according to his wont, he went to Sai Baba, prostrated himself before Him, invoked His aid, and requested Him to cure the case. He also asked His permission to go to his brother’s house. Then Sai Baba said, “Don’t go there at this late hour (night), send her Udi. Why care for the fever and bubos? God is our father and master; she will be alright easily. Do not go now, but go there in the morning and return immediately.”

Shama had full faith in Sai Baba’s Udi. It was sent with Bapaji. It was applied on the bubos and some of it was mixed with water and was given to the patient for drinking. No sooner was it taken in, than perspiration set in profusely, the fever abated and the patient had a good sleep. Next morning Bapaji was surprised to see his wife alright and refreshed with no fever and bubos. When Shama went there next morning with Sai Baba’s permission he was also surprised to see her at the hearth and preparing tea. On questioning his brother, he learnt that Sai Baba’s Udi cured her completely in one night. Then Shama realized the significance of Sai Baba’s words. “Go there in the morning and return immediately.

After taking tea, Sharma returned and after saluting Sai Baba said,”Deva, what is this play of Yours? You first raise a storm and make us restless and then calm it down and ease us”. Sai Baba replied “You see mysterious is the path of action. Though I do nothing, they hold Me resonsible for the actions which take place on account of Adrista (destiny). I am only their witness. The Lord is the sole Doer and Inspirer. He is also most merciful. Neither I am God nor Lord. I am His obedient servant and remember Him often. He, who casts aside his egoism, thanks Him and he, who trusts Him entirely, will have his shackles removed and will obtain liberation”.

Now read the experience of an Irani gentleman. His young daughter got fits every hour. When the convulsion came she lost her power of speech, her limbs got shrunk and contracted and she fell down senseless. No remedy gave her any relief. Some friend recommended Sai Baba’s Udi to her father and asked him to get it from Kakasaheb Dixit at Vile Parle (suburb of Bombay). Then the Irani gentleman got the Udi and gave it mixed with water to his daughter daily for drinking. In the beginning the convulsions, which were coming on hourly, came every seven hours and after a few days the daughter recovered completely.

An old gentleman of Harda (C.P) was suffering from a stone in his bladder. Such stones are generally removed by surgical operations and people recomended him to undergo one. He was old and weak, lacked strength of mind and could not think of submitting himself to surgical treatment. His suffering was soon to end in another way. The Inamdar (City Officer) of that town happened to come there at this time. He was a devotee of Sai Baba and had always a stock of Udi with him. On the recommendation of friends, his son got some Udi from and mixing it with water, gave it to his old father to drink. Within five minutes the Udi was assimilated, the stone was dissolved and came out through his urine and old man was soon relieved.

A woman of the Kayastha Prabhu caste in Bombay always suffered terrible pain at her delivery. She was very much frightened each time she became pregnant and did not know what to do. Shri Rama-Maruti of Kalyan, who was a devotee of Sai Baba advised her husband to take her to Shirdi for a painless delivery. When she next became pregnant, both husband and wife came to Shirdi, stayed there for some months and worshipped Sai Baba and got all the benefit of His company. After some time the hour of delivery came and as usual there was obstruction in the passage from the womb. She began to suffer labour pains, did not know what to do, but began to pray to Sai Baba for relief. In the meantime, some neighbouring women turned up and after invoking Sai Baba’s aid, gave her Udi-mixture to drink. In five minutes, the woman delivered safely and painlessly. The issue was still-born according to its fate; but the mother who got rid of the anxiety and pain, thanked Sai Baba for the safe delivery and ever remained grateful to Him. 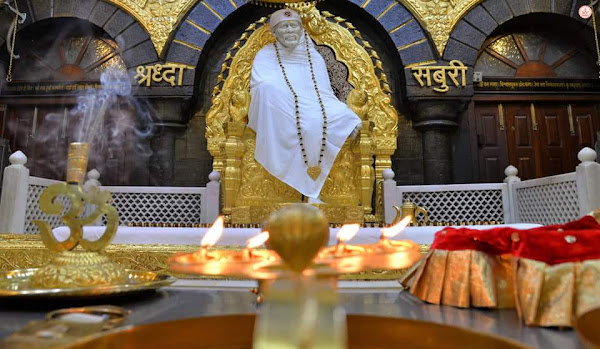