Video of Chapter 38 of Shri Sai Satcharitra in English

In the last chapter we described Baba’s Chavadi procession. In this we take up Baba’s Handi (cooking pot) and some other subjects.

Oh, blessed Sad-guru Sai, we bow to You, Who have given happiness to the whole world, accomplished the welfare of the devotees and have removed the affliction of those who have resorted to Your Feet. Being very liberal and being the protector and saviour of the Bhaktas who surrender themselves to You, You incarnate yourself in this world to oblige the people and do them good. The liquid essence of Pure Self was poured into the mould of Brahma and out of this has come out the crest-jewel of the saints-Sai. This Sai is Atmarama Himself. He is the abode of perfect divine bliss. Having Himself attained all objects of life, He made His devotees desirelss and free.

Different sadhanas (means of accomplishments) are prescribed in our scriptures for different ages. Tapa (Penance) is recommended for Krita age, Jnana (Knowledge) for Treta age, Yajna (Sacrifice) for Dwapara age and Dana (Charity) for Kali (present) age. Of all the charities, giving food is the best one. We are much perturbed when we get no food at noon. Other beings feel similarly under similar circumstances. Knowing this, he who gives food to the poor and hungry, is the best donor or charitable person. The Taittiriya Upanishad says that “Food is Brahma; from food all the creatures are born and having been born, by food they live, and having departed, into food again they enter.” When an Atithi (uninvited guest) comes to our door at noon, it is our bounden duty to welcome him by giving him food. Other kinds of charities, viz., giving away wealth, property and clothes etc., require some discrimination, but in the matter of food, no such consideration is necessary. Let anybody come to our door at noon, he should be served forthwith; and if lame, crippled, blind and diseased paupers come, they should be fed first and the able-bodied persons and our relations afterwards. The merit of feeding the former is much greater than that of feeding the latter. Other kinds of charities are imperfect without this Anna-dana (giving of food) as stars are without the moon, a necklace without its central medal, a crown without pinnacle, a tank without a lotus, bhajan without love, a married lady without the kumkum-mark, singing without a sweet voice or butter-milk without salt. Just as varan (Pulse-soup) excels all other dishes, Anna-dana is the best of all merits. Now let us see how Baba prepared food and distributed it.

It has been stated before that Baba required very little food for Himself and what little He wanted, was obtained by begging from a few houses. But when He took it into His mind to distribute food to all, He made all preparations from beginning to end, Himself. He depended on nobody and troubled none in this matter. First He went to the bazar and bought all the things, corn, flour, spices etc., for cash. He did also the grinding. In the open courtyard of the Masjid, He arranged a big hearth and after lighting a fire underneath kept a Handi over it with a proper measure of water. There were two kinds of Handi, one small and the other big. The former provided food for 50 persons, the later for 100. Sometimes He cooked ‘Mitthe Chaval’ (sweet rice), and at other times ‘pulava’ with meat. At times in the boiling varan (soup), He let in small balls of thick or flat breads of wheat flour. He pounded the spices on a stone-slab, and put the thin pulverized spices into the cooking-pot. He took all the pains to make the dishes very palatable. He prepared ‘Ambil’ by boiling jawari-flour in water and mixing it with butter-milk. With the food He distributed this Ambil to all alike. To see whether the food was properly cooked or not, Baba rolled up the sleeve of His Kafni and put His bare arm in the boiling cauldron without the least fear, and churned (moved) the whole mass from side to side and up and down. There was no mark of burn on His arm, nor fear on His face. When the cooking was over, Baba got the pots in the Majid, and had them duly consecrated by the moulvi. First He sent part of the food as prasad to Mhalasapati and Tatya Patil and then He served the remaining contents with His own hand to all the poor and helpless people to their hearts’ content. Really blessed and fortunate must be those people who got food prepared by Baba and served by Him.

Somebody may raise a doubt here and ask – “Did Baba distribute vegetable and animal food as prasad alike to all His devotees?” The answer is plain and simple. Those who were accustomed to (take) animal food were given food from the Handi as prasad and those who were not so accustomed, were not allowed to touch it. He never created in them any wish or desire to indulge in this food. There is a principle well established that when a Guru himself gives anything as prasad, the disciple who thinks and doubts whether it is acceptable or otherwise, goes to peridition. In order to see how any disciple has imbibed this principle, Baba at times proposed tests. For instance, on an Ekadashi day He gave some rupees to Dada Kelkar and asked him to go in person to Koralha to get mutton from there. This Dada Kelkar was an orthodox Brahmin and kept all orthodox manners in his life. He knew that offering wealth, grain and clothes etc., to a Sad-guru was not enough but that implicit obedience to and prompt compliance with His order was the real Dakshina that pleased Him most. So Dada Kelkar dressed himself and started for the place. Then Baba called him back and said, “Don’t go yourself, but send somebody.” Then Dada sent servant Pandu for the purpose. Seeing him starting, Baba asked Dada to call him back and cancelled that programme. On another occation Baba asked Dada just to see how the saltish `Pulava’ (mutton dish) was done. The latter said casually and formally that it was alright. Then Baba said to him – “Neither you have seen it with your eyes, nor tasted in with your tongue, then how could you say that it was good? Just take out the lid and see.” Saying this Baba caught his arm and thrust it into the pot and added, “Draw out your arm and taking a ladle, put some quantity in the dish without caring for your orthodoxy and without blustering.” When a wave of real love rises in a mother’s mind, she pinches her child with her hand and when it begins to cry and shout, she hugs it close to her bosom. Similarly Baba, in a true motherly way pinched Dada Kelkar in this fashion. Really no saint or guru will ever force his orthodox disciple to eat forbidden food and defile himself thereby.

The Handi business went on for some time till 1910 and was stopped thereafter. As stated before, Das Ganu spread the fame of Baba by his kirtans far and wide in the Bombay Presidency and people from that part of the country began to flock to Shirdi, which became in a few days a place of pilgrimage. The devotees brought with them various articles for presentation and offered various dishes of food as naivedya. The quantity of naivedya offered by them was so much that the fakirs and paupers could feed themselves to their hearts’ content, leaving some surplus behind. Before stating how naivedya was distributed, we shall refer to Nanasaheb Chandorkar’s story showing Baba’s regard and respect for local Shrines and deities.

Nanasaheb’s Disrespect of a Shrine

By drawing inferences or guessing in their own way some people said that Sai was a Brahmin, and some that He was a Moslem. Really He belonged to no caste. No one knew definitely when He was born and in what community and who were His parents. Then how could He be a Moslem or Brahmin? If He were a Moslem, how could He keep Dhuni fire ever burning in the Masjid, how could there be a Tulsi Vrindavan there, how could He allow the blowing of conches and ringing of bells and the playing of the musical instruments, how could He allow all the different forms of Hindu worship, there? Had He been a Moslem, could He have pierced ears and could He have been spent money from His pocket for repairing Hindu temples? On the contrary He never tolerated the slightest disrespect to Hindu Shrines and deities.

Once Nanasaheb Chandorkar came to Shirdi with his ‘Sadu’ – husband of his sister-in-law, Mr.Biniwalle. When they went to the Masjid and sat before Baba talking, the latter suddenly got angry with Nanasaheb and said – “You are so long in My company and how do you behave like this?” Nanasaheb then at first did not understand anything and humbly requested Baba to explain. Baba asked him when he came to Kopergaon and how he came to Shirdi from thence. Nanasaheb then at once realized his mistake. He usually worshipped the Shrine of Datta, on the banks of the Godavari at Kopergaon on his way to Shirdi, but this time he dissuaded his relation who was a Datta Bhakta from going to that Shrine, to avoid delay and drove straight. He confessed all this to Baba and told Him that while bathing in the Godavari, a big thorn went into his foot and gave him much trouble. Baba said that, that was the slight punishment be met and warned him to be more careful in future.

To revert to the distribution of the naivedya. – After the arati was over and after Baba sent away all the people with Udi and blessings, He went inside and sat with his back to the Nimbar for meals, with two rows of the Bhaktas, one on each side. The Bhaktas who brought naivedya thrust inside their dishes containing a variety of food such as Puris, Mande, Polis, Basundi, Sanza, fine rice etc., and kept waiting outside for prasad consecrated by Baba. All the foods were mixed in a hotch-potch and placed before Baba. He offered it all to God and consecrated it. Then portions of the same were given to the persons waiting outside and the rest was served to the inner party with Baba at the centre. The Bhaktas sitting in two rows then dined to their hearts’ content. Baba asked Shama and Nanasaheb Nimonkar daily to serve the consecrated food to all the persons sitting inside and look to their individual needs and comforts. This they did very carefully and willingly. Every morsel of the food thus partaken gave them nutrition and satisfaction. Such sweet, lovely and consecrated food it was! Ever auspicious and every holy!

Once Hemadpant had eaten his full in this company, when Baba offered him a cup of butter-milk. Its white appearance pleased him, but he was afraid that there was no space inside for it. He, however, took a sip which proved very tasty. Seeing his faltering attitude, Baba said – “Drink it all, you won’t get any such opportunity hereafter.” He drank it off then, but found that Baba’s words were prophetic, for He passed away soon.

Now, readers, we have certainly to thank Hemadpant. He drank the cup of butter-milk, but has supplied us with sufficient quantity of nectar in the form of Baba’s Leelas. Let us drink cups and cups of this nectar and be satisfied and happy. 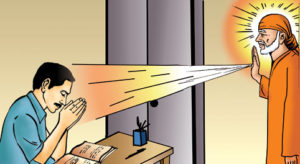 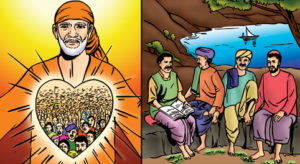