This Chapter describes Shama’s strip to Kashi, Prayag and Gaya and how Baba (in the Form of His portrait) was there ahead of him; it also describes Baba’s reminiscences of the past birth of two goats.

Blessed, Oh Sai, are Your Feet, blessed is Your remembrance and blessed is Your darshana which frees us from the bond of Karma. Though Your Form is invisible to us now, still if the devotees believe in You, they get living experiences from You. By an invisible and subtle thread You draw Your devotees from far and near to Your Feet and embrace them like a kind and loving mother. The devotees do not know where You are, but You so skillfully pull the wires that they ultimately realize that You are at their back to help and support them. The intelligent, wise and learned folk fall into the pit of the samsar on account of their egoism, but You save, by Your power, the poor, simple and devout persons. Inwardly and invisibly you play all the game, but show that you are not concerned with it. You do things and pose yourself as a non-doer. Nobody ever knows Your life. The best course therefore for us is to surrender our body, speech and mind to Your Feet and always chant Your name for destroying our sins. You fulfill the wishes of the devotees and to those who are without any desire You give bliss supreme. Chanting Your sweet name is the easiest sadhan for devotees. By this sadhan (means), our sins, Rajas and Tamas qualities will vanish, the Sattwa qualities and righteousness will gain predominance and along with this, discrimination, dispassion and knowledge will follow. Then we shall abide in our Self and our Guru (who are one and the same). This is what is called complete surrender to the Guru. The only sure sign of this is that our mind gets calm and peaceful. The greatness of this surrender, devotion and knowledge is unique; for peace, non-attachment, fame and salvation etc., come in its train.

If Baba accepts a devotee, He follows him and stands by him, day and night, at his home or abroad. Let the devotee go anywhere he likes, Baba is there ahead of him in some form in an inconceivable manner. The following story illustrates this.

Sometime after Kakasaheb Dixit was introduced to Sai Baba, he decided to perform the thread (Upanayan) ceremony of his eldest son Babu at Nagpur. At about the same time Nanasaheb Chandorkar decided to perform the marriage ceremony of his eldest son at Gwalior. Both Dixit and Chandorkar came to shirdi and lovingly invited Baba for these functions. Baba asked them to take Shama as His representative. When He was pressed to come in person. Baba told them to take Shama with them and that “after doing Banares and Prayag He would be ahead of Shama.” Now mark these words for they show Baba’s all-pervasiveness.

Taking the permission of Baba, Shama decided to go to Nagpur and Gwalior for these functions and ceremonies and thence to Kashi, Prayag and Gaya. Appa Kote made up his mind to accompany him. They both went first to Nagpur for the thread ceremony. Kakasaheb Dixit gave Shama Rs.200/- for his expenses. Then they went to Gwalior for the marriage ceremony. There Nanasaheb Chandorkar gave Shama Rs.100/- and his Vyahi (relation) Mr.Jather gave him also Rs.100/-. Then Shama went to Kashi, and then to Ayodhya where he was well received in Jather’s beautiful temple of Laxmi-Narayan at Kashi (Varanasi or Banares) and in the Rama-Mandir at Ayodhya by Jathar’s manager. They (Shama and Kote) stayed for 21 days in Ayodhya and two months in Kashi (Banares). Then they left for Gaya. In the train they felt a little uneasy on hearing that plague was prevailing in Gaya. At night they alighted at Gaya station and stayed in the Dharmashala. In the morning the Gayawala (the Priest who arranges and provides for the lodging and boarding of the pilgrims) came there and aid – “The pilgrims have already started, you better make haste.” Shama casually asked him whether there was plague in Gaya. “No” said the Gayawala. “Please come without any fear or anxiety and see yourself.” Then they went with him and stayed in his house which was a big and commodious Wada. Shama was pleased with the accommodation provided for him, but what pleased him most, was the beautiful big portrait of Baba fixed in the central and front portion of the building. Seeing this portrait Shama was overwhelmed with emotion. He remembered Baba’s words, viz., “After doing Kashi and Prayag He would be ahead of Shama” and burst into tears. His hairs stood on end, his throat was choked and he began to sob. The Gayawala thought that he was afraid of plague prevailing there and therefore was crying. But Shama enquired of him whence he got Baba’s portrait there. He replied that he had 200 or 300 agents working at Manmad and Punatambe for looking to the convenience of the pilgrims to Gaya and from them he heard about Baba’s fame. Then about 12 years ago he went to Shirdi and took Baba’s darshana. There he wanted Baba’s portrait hung in Shama’s house and with Baba’s permission Shama gave it to him. This was the same protrait. Shama then remembered this former incident. The Gayawalas’s joy knew no bounds when he learnt that the same Shama who obliged him before, was his guest then. Then they both exchanged love and service and were most delighted and happy. The Gayawala gave him a right royal welcome. He was a very rich man. He sat in a palanquin and made Shama ride an elephant and attended to all his comforts and conveniences.

The moral of the story is this:- That Baba’s words came out true to the letter and unbounded was His love towards the devotees. But leave this aside. He also loved all creatures equally, for He felt that He was one with them. The following story will illustrate this.

Baba was once returning from Lendi, when He saw a flock of goats. Two of them attracted His attention. He went to them, caressed and fondled them and bought them for Rs.32/-. The devotees were surprised at this conduct of Baba. They thought that Baba was duped in this bargain, as the goats would fetch Rs.two each, at the most Rs.3/- or 4/- each, i.e., Rs.8/- for both. They began to take Baba to task for this, but Baba kept calm and cool. Shama and Tatya Kote asked Baba for an explanation. He said He should not store money as He had no home, and any family to look after. He asked them to purchase at His cost 4 seers of ‘dal’ (lentil) and feed the goats. After this was done, Baba returned the goats to the owner of the flock and gave out of the following reminiscences and story of the goats.

“Oh, Shama and Tatya, you think that I have been deceived in this bargain. No. Listen to their story. In their former birth they were human beings and had the good fortune to be My companions and sit by My side. They were uterine brothers, loving each other at first, but later on, they became enemies. The elder brother was an idle fellow while the younger one was an active chap and earned a lot of money. The former became greedy and jealous and wanted to kill his brother and take away his money. They forgot thier fraternal relations and began to quarrel with each other. The elder brother resorted to many devices to kill his younger brother, but all of his attempts failed. Thus they became deadly enemies and finally on one occasion the elder gave a deadly blow with a big stick on the latter’s head while the latter struck the former with an axe, with the result that both fell dead on the spot. As the result of their actions, they were both born as goats. As they passed by me, I at once recognized them. I remembered their past history. Taking pity on them I wanted to feed them and give them rest and comfort and for this reason I spent all the money for which you reprove me. As you did not like My bargain I sent them back to their shepherd.” Such was Sai’s love for the goats! 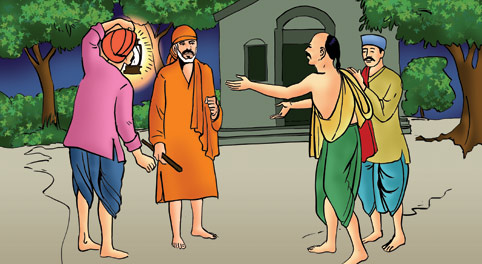