Baba’s Reminiscences Story of Veerbhadrappa and Chenbassappa (Snake and frog)

Contents hide
1 Baba’s Reminiscences Story of Veerbhadrappa and Chenbassappa (Snake and frog)
1.1 Preliminary
1.2 The Snake and the Frog
1.3 The Moral
2 Video of the Chapter

The last chapter described Baba’s reminiscences about two goats. This describes more such reminiscences and relates the story of Veerbhadrappa and Chenbassappa.

Blessed is the face of Sai. If we cast a glance at Him for a moment, He destroys the sorrow of many past births and confers great bliss on us; and if He looks at us with grace, our bondage of Karma is immediately snapped away and we are led to happiness. The river Ganges washes away the dirt and sins of all people who go to her for a bath; but she intently longs for the saints to come to her and bless her with their feet and remove all the dirt (sins) accumulated in her. She knows for certain that this accumulation can only be removed by the holy feet of the saints. Sai is the crest-jewel of the saints, and now hear from Him the following purifying story.

The Snake and the Frog

Sai Baba said – “One morning after taking My breakfast I strolled along till I came to a small river bank. As I was tired, I rested there, washed My hands and feet and had a bath and felt refreshed. There was a foot-path and a cart-track sheltered by shady trees. The breeze was also blowing gently. As I was preparing to smoke chillim (pipe), I heard the croaking of a frog. I was striking the flint and lighting the fire, when a traveller turned up, sat by My side, bowed to Me and politely invited Me to his house for meals and rest. He lit up the pipe and handed it over to Me. The croaking was heard again and he wanted to know what it was. I told him that a frog was in trouble and was tasting the bitter fruit of its own karma. We have to reap now the fruit of what we sow (do) in our past life, and there is no use in crying about it. Then he smoked and handed over the pipe to Me and said that he would go there in person and see for himself. I told him that a frog was caught by a big snake and was crying. Both were very wicked in their past life and were now reaping the fruit of their actions in these bodies. He went out and found that a huge black serpent was holding a big frog in its mouth.

He turned to Me and said that in about 10 or 12 minutes the frog would be eaten up by the snake. I said, “No, this can’t be. I am its father (protector) and I am here now. How shall I allow the snake to eat it up, am I here for nothing? Just see how I release it.”

After smoking again, we walked on to the place. He was afraid and asked Me not to proceed further as the snake might attack us. Not minding him, I went ahead and addressed the creatures thus:- “Oh Veerbhadrappa, has not your enemy Bassappa yet repented though he has been born as a frog, and you too, though born as a serpent, still maintain bitter enmity against him? Fie upon you, be ashamed, give up your hatred now and rest in peace.”

Hearing these words, the snake left the frog quickly and dived into the river and disappeared. The frog also jumped away and hid itself in the bushes.

The traveller was much surprised; he said that he could not understand how the snake dropped the frog and disappeared at the words uttered, who was Veerbhadrappa and who was Basssappa, and what was the cause of their enmity. I returned with him to the foot of the tree and after sharing a few puffs of smoke with him I explained the whole mystery to his as follows:-

There was ancient holy place sanctified by a temple of Mahadev about 4 or 5 miles from My place. The temple was old and dilapidated. The residents of the place collected funds for its repairs. After a large amount was collected, arrangement for worship was made and plans with estimates for repairs were prepared. A rich local man was appointed the Treasurer and the whole work was entrusted to him. He was to keep regular accounts and be honest in all his dealings. He was a first class miser and spent very little for the repairs, which consequently made very little progress. He spent all the funds, swallowed some amount himself and spent nothing from his pocket. He had a sweet tongue and was very clever in offering plausible explanations regarding the poor and tardy progress of the work. The people again went to him and said that unless he lent his helping hand and tried his best, the work would not be complete. They requested him to work out the scheme and again collected subscriptions and sent the amount to him. He received it, but sat as quiet as before without making any progress. After some days, God (Mahadev) appeared in his wife’s dream and said to her – “You get up, build the dome of the temple, I will give you a hundred-fold of what you spend.” She told this vision to her husband. He was afraid that it would involve him in some expenses and therefore laughed it out saying that it was a mere dream, a thing not to be relied and acted upon, or else why did not God appear to him and tell him? Was he far off from her? This looks like a bad dream, having for its object the creation of ill feeling between husband and wife. She had to remain quiet.

God does not like big subscriptions and donations collected against the wishes of the donors, but He likes ever trifling amounts given with love, devotion and appreciation. Some days after, God again appeared in her dream and said – “Do not bother yourself about your husband and the collections with him. Don’t press him to spend any amount for the temple. What I want is, feeling and devotion. So give, if you like, anything of your own.” She consulted her husband about this vision and decided to give God her ornaments given by her father. The miser felt disconcerted and decided to cheat even God in this item. He undervalued the ornaments at Rs.1,000/- and bought them himself and in lieu of the amount gave a field to God as endowment or security. The wife agreed to this. The field or land was not his own, it belonged to one poor woman named Dubaki who mortgaged it to him for Rs.200/-. She was not able to redeem it for long. So the cunning miser cheated all, his wife, Dubaki and even God. The land was sterile, uncultivated and worth nothing and yielded nothing, even in best seasons.

Thus ended this transaction and the land was given in the possession of the poor priest who was pleased with the endowment. Sometime later on, strange things happened. There was a terrific storm and heavy down-pour of rain; lightning struck the house of the miser, when he and his wife both died. Dubaki also breathed her last.

In the next life, the rich miser was born at Mathura in a Brahmin family and was named Veerbhadrappa. His devout wife was born as the daughter of the priest of the temple and was named Gouri. The woman Dubaki (the mortgagor) was born as a male in the family of the Gurav (attendent) of the the temple and was named Chenbassappa. The priest was a friend of Mine, He often came to Me, chatted and smoked with Me. His daughter Gouri was also devoted to Me. She was growing fast and her father was seeking a good husband for her. I told him not to worry about this as the bridegroom himself would come seeking her. Then there came a poor boy named Veerbhadrappa of their caste, wandering and begging his bread to the priest’s house. With My consent Gouri was given in marriage to him. He was also at first devoted to Me as I recommended his marriage with Gouri. Even in this new life he was hankering after money and asked Me to help him to get it as he was leading a married man’s life.

Strange things happened. There was a sudden rise in prices. By Gouri’s good luck, there was a great demand for land and the endowment land was sold for one lakh of rupees (100 times the worth of her ornaments). Half the amount was paid in cash and the remaining was to be paid in 25 instalments of Rs. 2,000/- each. All agreed to this transaction, but began to quarrel over the money. They came to Me for consultation. I told them that the property belonged to God and was vested in the priest and Gouri was his sole heiress and proprietress and no amount should be spent without her consent and that her husband had no right whatsoever to the amount. Hearing my opinion Veerbhadrappa was wroth with Me and said that I wanted to establish Gouri’s claim and embezzle her property. Hearing his words, I remembered God and kept quiet. Veerbhadrappa scolded his wife (Gouri) and she came to Me at noon and requested Me not to mind the words of others and not to discard her as she was My daughter. As she thus sought My protection I gave her a pledge that I would cross seven seas to help her. Then that night Gouri had a vision. Mahadev appeared in her dream and said – “The whole money is yours, do not give anything to anybody, spend some amount for temple purposes in consultation with Chenbassappa and if you want to use it for some other purpose, consult Baba in the Masjid (Myself).” Gouri told Me the vision and I gave her the proper advice in the matter. I told her to take the principal or capital amount to herself, give half the amount of interest to Chenbassappa and that Veerbhadrappa had nothing to do in the matter. While I was thus talking, both Veerbhadrappa and Chenbassappa came there quarreling. I tried My best to appease them and told them God’s vision to Gouri. Veerbhadrappa got wild and angry and threatened to kill Chenbassappa cutting him to pieces. The latter was timid, he caught my feet and sought my refuge. I pledged Myself to save him from the wrath of his foe. Then after some time Veerbhadrappa died and was born as a snake and Chenbassappa died and was born as a frog. Hearing the croaking of Chenbassappa and remembering my pledge, I came here, saved him and kept My word. God runs to His devotees for help in times of danger. He saved Chenbassappa (the frog) by sending Me here. All this is God’s Leela or sport.”

The moral of the story is that one has to reap what one sows, and there is no escape unless one suffers and squares up one’s old debts and dealings with others, and that greed for money drags the greedy man to the lowest level and ultimately brings destruction on him and others. 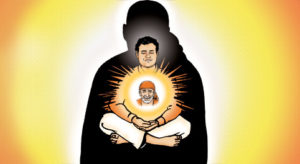 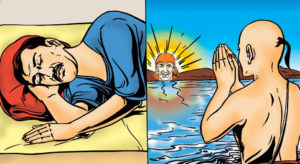 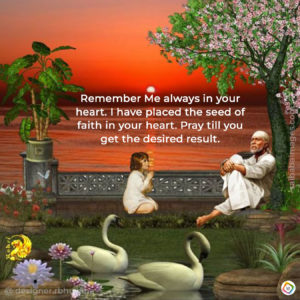